The Essence of Life ~ Porcupine Dates

For the past one week I had been away and spent my days in Hospital to look after my sick dad. The whole family is so exhausted and so hopeless seeing him in coma condition to brain dead condition. He was admitted Intensive Care Unit in coma and critical condition due to food poisoning and highly uric acid foods ingestion. The intestine containing e-coli (Escherichia coli) bacteria and which went into his blood, urine and brain cells. Plus his constants vomiting caused dehydration and lost of fluids. After heavy vomiting and the stomach acid have destroyed his esophagus becomes inflamed and sore.

To his illness condition and urination is getting lessen, and doctor said he may have to going through the operation procedure by insert a small tube; this operation procedure is called ureteral stent through the bladder into the ureter to restore the flow of urine to the bladder, as he is in difficulty to pass urine due to the swollen and inflammation kidney. Increase of urine creatinine level may leads to kidney failure, and certain complication has causes this syndrome.

We all so much so rejected this operation as he is still in the unstable coma, high fever, and critical condition, partly due to his elderly as the reasons, we think he is not advisable to going through this suffer again to increase risk. Moreover, he had done this surgery last year that really gave him uncomfortable and painful for months. It does not help much and causes other complications to him. The stent may have to remaining in place for short-term or maybe long term basis.

The doctor has no guarantee that surgery would save his life. At this stage, we rejected the doctor’s suggestion; doctor warned us and he would not responsible for our intention for not doing the insertion of ureteral stent for urination operation. We afraid the surgery may worsening the infection.

To our surprise he was awakened from the coma, it is miracle. But he can’t talk and eat. The throat incubation has save his lives but also caused inflammation to his throat. And what we can do it to first reduces his inflamed throat to minimize the pains and fever. Secondly, is to control the uric acid and help in passing urination by natural way to reduce the swollen kidney. At this moment, we came to the conclusion of using alternative way of homeopathic remedy for detoxification process, to get rid of his inflamed throat and kidney.

I came across this miracle stuff that suggested by my mom and sister. At first, we were quite discouraged to use such an expensive way of homeopathic treatment, reason is how truth and any harmful side effect after all. So I surf online for further information, and I came to this website and found out more. Then from what we had tried on him, it is really a good stuff for alternative healing instead of going through operation procedure. This is only the alternative way to soothe and lessen his throat inflammation at the first place, when we decided to do so. But anyhow, we had done with the doctor’s supervision.

We bought this stuff from Chinese medicine shop. To be frankly, the price is shocking high, due to its valuable effect, hard to find also one of the reason, and we also can’t believe it.

At first, I told my friends about this stuff and its benefits, it is a miracle alternative medicine to my dad, and my friend suggested whether I would place this article on my “Simply Senz” blog?

I just simply answer my friend that ‘it is such an expensive medicine, this may caused the crisis of price to the medicine’; hopefully not. Yet still many peoples are not awake of its usage and useful benefits in alternative way of healing. So now I decided to place here as an alternative healing reference to my readers.

After few doses of feeding to my dad with this ‘Porcupine Dates’, though I still can’t believe the goodness of its healing. After a short period of 2 days, he has rapidly recovered and reduces of painful throat; the ulcer in his mouth has reduced. Now he can talk and drink some liquid foods. Fever has been reduced. His urination is flow smoothly and clears without the crystal substance in it. The creatinine count in the urine,values range from 4700/mg has dropped and reduces rapidly to 1700/mg in normalize level.

What is Porcupine Dates and where it comes from? 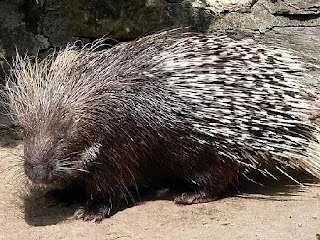 This Porcupine Dates can be found in South East Asia, that can buy from certain Chinese medicine shop.

The characteristics of Porcupine Dates are calculus growth like a rare “stone” shape like a “date”, that found in the stomach of a porcupine. When porcupine is ill or injured, porcupine will find the wild growth herbs in the forest to cure itself. As the virus is besieged this porcupine dates will grow as the healing progress this “dates shape stone” may form in the stomach. The size and the medical value is based on the duration of time, or it grows in bigger size by the age of the porcupine.

I tasted this porcupine dates, its taste is bitter, cold, channel to meridian of the liver, heart, lung, gall bladder. The benefit is to remove phlegm, heat, detoxification, natural immunization booster, anti-inflammation, anti-body and supper antioxidant.

Traditionally, this has been recorded in old Chinese medicine book. According to its valuable testimonial has been shown successfully treat lymphoma, blood cancer, dengue fever, meningitis, fever, retention of fluid to the lungs, lumber swollen, and herpes complex, before operation or after surgery, diabetes and lungs infection. To defuse the general side effects after the surgery, such as analgesic, antipyretic, defuse chemotherapy and radiotherapy post therapy side effects.

This is the video clips about “Porcupine Dates” I found online.

What I can see that some of the “Food” can be poisonous if overeating, also food can be a healer too. What I am trying to say homeopathic remedy sometimes does help a lot. Remember, before trying any alternative homeopathic remedy please consult your doctor or physician first.

I hope through this experience that I overcoming in using the alternative way of homeopathic remedy to my dad, to share it with other when situation comes to worst stage. If needed, no harm trying to help in minimizes the painful condition to elderly sick patient if needed. It also depending on individual body health condition.

Porcupine dates maybe an expensive Chinese medicine, yet to find out more and discover more about its medicinal value. I personally experienced this unique and helpful porcupine date in treating my Dad, his brain damaged to critical brain dead condition, it is a way for his terminally ill to at least has the last chances of back to life. I took the video information from one of the Chinese medicine company, hope this is not offence of copyrights. But this may help many others who really need more information about the good stuff and I shared.