I found myself drinking weird stuff just to get healthy. I also got more interested in healthy food in general.

But the truth is I am one very health conscious person just because I was unhealthy previously. Now I need to boost my immunity system by ways of taking organic Vinegars from A to Z types.

Someone gave me a weird stuff like this….a type of Red Tea enzymes or fungus. I think I seen this before when I was young girl that my mom is doing this YUKKY stuff all the times. So as I went through researched and get more info about it. Quite interesting and I begin to make my own Kombucha.

What is "Hai Bao" or Kombucha

This is so called the “Hai Bao” or “Sea Treasure” in Taiwan, “Hong Cha Ku” in chinese, “Black Tea Mushroom” . In English it is called “Kombucha”.

This fungus culture starter is given by a friend of mine. He taught me how to made with the culture start and fermented by multiplying it. And he claimed it is good for my cough and irritating throat. So I just try it .... 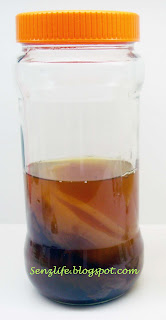 This is what I got after 15 days of fermentation process in the bottle.


During fermentation period cover with a loosely-woven cotton fabric, is to help allow air to get in through the weave also keeping out of insects.

Before I take this healthy drink I feel afraid, and so yukky to see the floating agent inside the bottle.Now I am so used to it. 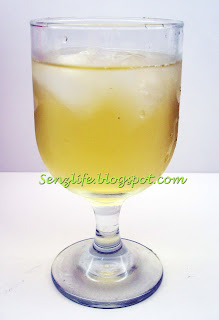 How it tastes? Hmmm…it tasted like prune juice or cider vinegar taste of sweet and sour.


Well, I did tried and its taste not too bad. Just like taking fruit vinegar.

At first I am not sure where it comes. What is that actually and I surfed through internet before taking it. So I surfed through internet found out there are 3 types of healthy enzymes like yogurt culture, Kefir and this one of them is “Kombucha”.
The tea fungus puts in the healthy drink which ferments in the same place, it is said most gets up early the source from country of Eastern Qin Dynasty time.

What is Kombucha made from?
Kombucha is a fermented beverage prepared from a mushroom (Fungus japonicas). It is fermented by tea, sugar and black tea culture or starter whatsoever.
When the fungus is fermented in a mixture containing water, black or green tea, sugar, and vinegar (or other fermentation source), the microorganisms combine into a complex fermenting culture.

One kind of complex tea which ferments with the bacterium and the saccharomycetes (kombucha, also said that Red tea mushroom).
This tea fungus is one kind of saccharomycetes and the bacterium (contains acetic acid bacteria and lactobacillus) Paragenesis organism, is native to area the Northeast China, as well as used in Russia, in 1971 a Japanese saw in Caucasus many longevity's old people drank this kind of drink, therefore brought it back to Japan to raise becomes famous.
Although this kind of drink said that was one kind of healthy drink, but the clinical research had not demonstrated that it had promotion its health valve, once some people drank it and had acidosis, symptoms of liver poison, including dead, therefore it is best to consult your doctor before taking this “Black tea mushroom”, that was only then good for your health concerned.
Since my friend claimed it is good for health. Because it's such a wonderful "natural healing" stuff, Oh...once I heard it is natural healing..hmmm, must be good stuff as I treasure it so much.

It is said to work wonders for the black tea fungus is one kind the family who spreads from the Dynasty pre-Qin period, the benefits is as it stimulates and detoxification. Also as general health tonic drink.
In year 1925-1950 it carries on the medical research indicated that this Red tea fungus has the antibacterial function, adjusts the stomach, the intestines and gland's function, can alleviate the rheum arthritis, arthritis and hemorrhoids' symptom, also lower the cholesterol, atherosclerosis, the poison excretion, diabetes and has the improvement function sensibly.

It is taken to strengthen the immune system after an illness, stimulate hair growth, improve arthritis and skin conditions, and as a health tonic for cancer and autoimmune deficiency syndrome (AIDS) patients. There is no large body of scientific evidence that supports the strong claims yet to discovery which carries on 1951, every day drinks the Red tea fungus is good to enhance the immunity and the promotion interferon production.


However how good or bad for health it depends on the further research to discover more.

The preparation and how fermentation process

The fermentation of kombucha tea takes 12–14 days. After fermentation, new batches can be easily made from the existing culture.

According to him, he said this is very good for cough and sore throat. For the sake of irritating throat, I took that in the morning or after my meal…hey…it works!!

And I feel good as I taking it every morning like taking fruit vinegar. Vinegar is always just an ingredient for my tonsillitis, and nothing more, nothing less. Just for prevention purposes.

I don’t care how yukky about the taste. What I tasted I blog for the purpose of sharing with others.