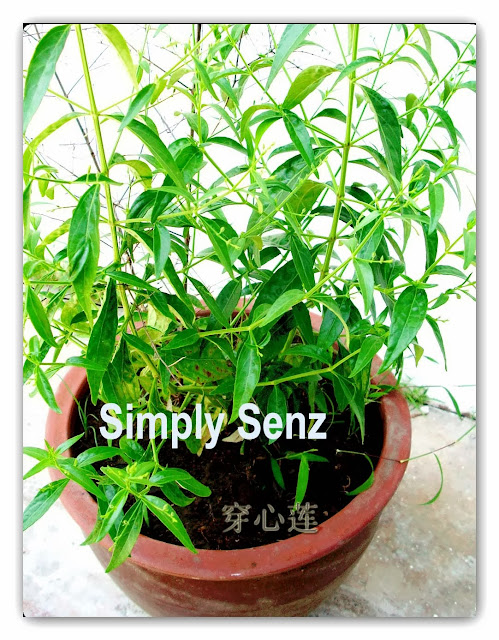 Due to my tonsillitis problem, I need to safeguard myself with several home remedies herbs. From A to Z if that is alternative way of natural healing, So I have to plant some of the useful herbs at my herbs garden.

This herb looks quite similarly to Sabah Snake Grass (SSG). But this is not SSG. It also has its other name known as "Snake Grass". You can easily found this herb nearby or beside of the flower pot, or it grows like wild weed at your garden.

I like this bitter taste herbs, it is known as "Chuan Xin Lian" or "Ku Cao"

The whole plant is very useful and quite popular in capsule form that sold in China and Asia.


Its meridian channels to heart and lung.


Andrographis, as its anti-tumor activity in the study of traditional medicine in recent concern. According to the recent and latest researches found Chuan Xin Lian or Andrographis paniculata plant extracts and compounds with antiproliferative activities or tending to suppress tumor cell growth to most colon carcinoma cell, and Colorectal cancer treatment with andrographolide as a future alternative treatment of colon cancer by andrographolide is worth more research.

It also produced a strong anti-angiogenic activity in tumor tissue and immunomodulatory active agents, and effects on cancer cells in addition to its cytotoxic effect. Likewise this herb is also applicable to treat of breast cancer, colon cancer, liver cancer, cervical cancer, leukemia, and prostate cancer. Such a fact by using of alternative herb in treatment, this may requires certain combination therapy, through one or more compounds as it affects in multiple pathways. Although many plant molecules exhibit miraculous effect of chemotherapy, but there are also many herb compounds can act as potential anti-cancer drugs, which need to conduct a lot of research and further to work better in way of improving of immune regulation to fight against tumor cells.

And I found with my own testimonial by using of Chuan Xin Lian dried leaves, as this herb is real bitter, so I dried the leaves and blended it into powder form then insert it into capsule form. So that it's easier for swallowing or consumption. 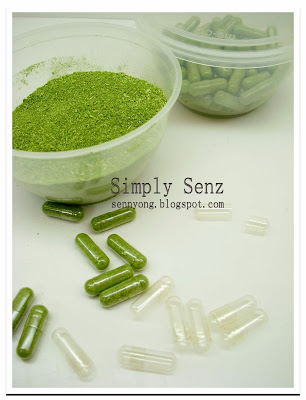 I used Andrographis or Chuan Xin Lian capsules to a friend who suffers with dermatitis type of skin problem (herpes-like pimple) around the corner of his mouth area, by taking this "Xuan Xing Lian" capsules for 2 weeks and surprisingly it healed and solved that skin problem. For here it proven this herb has highest anti-inflammation treatment result.

Chuan Xin Lian is rich in amino acids, flavonoids, polyphenols ingredients, important phytosterol and choline, it is good home remedies for cooling the blood, diarrhea, urinary tract infection, soothing the throat and solve inflammation. Especially good to use on sinus and nose syndrome too.

Instead of taking it raw I used to make it as detox tea "Ku Cha" (bitter herbal tea) whenever I am having sore throat or tonsillitis infection.

It is very simple, just simmer 3 - 4 Chuan Xin Lian Leaves into hot water in a pot. Simmer for 1/2 an hour or more, then serve it warm.